those who survived and

those who did not,

those still injured and
those doing well.

Serving Those Who Served®

We look out for our Marines, and we remind all Americans to honor the awesome sacrifices Marines made for them.

The Failure of Leadership in America
Leadership—or rather the lack of it—has made the headlines lately. Sadly, some of these stories reflect upon agencies of the American government: the Veteran’s Administration; Internal Revenue Service, and others.  Looking back in history, one can find many shining examples of leadership. There are many who may be cited, ones who earned themselves the admiration and respect of their countrymen.

ABOUT THE MARINE CORPS VETERANS ASSOCIATION

The Marine Corps Veterans Association was founded in 2007, and registered as a 501(c)(19) nonprofit war veterans' organization with the primary

purpose of offering assistance to Marines and Navy Corpsmen and their families, including active duty, former, retired, disabled and injured.
The organization’s mission is to provide recognition, honor, aid and assistance to all Marines and Corpsmen, and their families, as well as assisting, providing recognition and honoring other members of the Armed Forces of the United States, and their families, as a patriotic mission to benefit
active duty members, as well as veterans, of the Armed Forces. Regular membership is open to Marines and Navy Corpsmen (Fleet Marine Force)
with honorable service. For specific membership requirements, contact us. 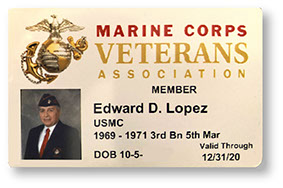 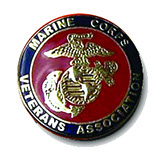 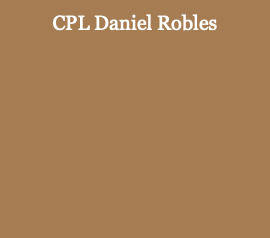 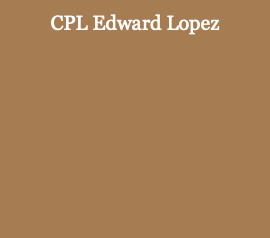 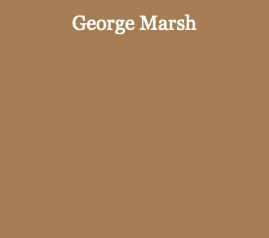 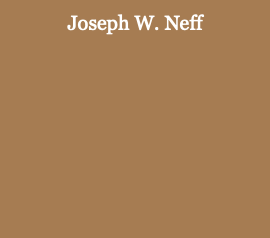 Corporal Daniel Robles enlisted into the United States Marine Corps in June 1988 and served until June 1993, when he was honorably discharged. Prior to his enlistment, Cpl. Robles was attending Palomar Community College in San Marcos, CA, focusing on aviation meteorology, air traffic control course and general aviation. Early in his military career, he attended the Marine Corps Communication-Electronics School (MCCES) in Twentynine Palms, CA and graduated as a Field Radio Operator (2531). Upon entering the Fleet Marine Force, Cpl. Robles first assignment was 2nd Bn, 3rd Mar, H&S Co., Communications Platoon, on December 12, 1988, where he remained until December 1992. It was during this period that Cpl. Robles, earned numerous awards, which include the Navy Achievement Medal, Combat Action Ribbon, Certificate of Commendation, Meritorious Mast (twice), Southwest Asia Service Medal, Overseas Service Ribbon (thrice), Good Conduct Medal, among other ribbons. After completing his service with 2nd, Bn, 3rd, Marines, in 1992, he was offered several career opportunities, but settled on working with Headquarters Squadron at Marine Corps Base Kaneohe Bay, HI, until his discharge from active duty.

George Marsh is the Commanding Officer and Executive Director of the Marine Corps Veterans Association. He served with the 4th Force Service Regiment, Maintenance Battalion, USMCR, from 1964 to 1970. In more recent years, Marsh served with the Vietnam Veterans Memorial Watch Committee, and was the National Veterans Recruiter of the Year. Marsh holds a Master's Degree in Government with an emphasis in International Relations and Constitutional Rights, and earned a Master of Science degree in Education. Marsh's civic involvement has included being twice elected to the Cordova Park and Recreation District Board of Directors. He was also a member of the steering committee of the Crime Victims for Court Reform, in their successful efforts to remove anti-death penalty California Supreme Court Judge Rose Bird from office. He has also lectured with Michael Bernstam, Nobel Prize nominee, in arguing against the proposed nuclear freeze. Marsh believes a strong American military capability is necessary to safeguard American democracy.

Corporal Edward Lopez enlisted into the United States Marine Corps in 1969 and served until 1971, when he was Honorably Discharged serving with the 3rd Battalion 5th Marine Division. He served standby four more years in an Active Ready Reserve Status until 1975. His Military Occupational Specialty was an Administrative Man in charge of H&S, Delta and Charlie Companies in the Republic of Vietnam with the Naval Evacuation Field Hospital in Danang from 1969 to 1970. After his active duty discharge he completed two years of college and earned a degree in Communication Arts. Cpl Lopez was approached by the USMC Reservists to become a Warrant Officer at his home town USMC Reserve Facility in Pico Rivera, CA but declined the offer.

He worked at the Southern California Gas Company for 25 years, and held the Lead Graphic Designer position in the Graphics Department for 17 years. After relocating to Sacramento, he worked for Advertising Companies as a Designer in Sacramento and Stockton CA. Later he joined the Walgreens Photo Department when it switched to the Digital Format and taught managers and new incoming photo personnel within the regional stores until his retirement on November 11, 2011
(11/11/11 11:11am Veterans Day)

Background: During his high school years, Joe found an athletic home in track. He qualified for the California Interscholastic State Championships in 1962. He finished third in the state in the mile. He has personal bests of 4:05 in the mile and 1:49.2 in the half mile. Joe received an athletic scholarship to San Jose State where he qualified for the NCAA track and cross country national championships. At one point, Joe led the nation in the half mile. Joe met his wife-to-be at San Jose State in 1965. They married in April of 1966. In March of 1968, Joe was accepted to the U.S. Marine Corps Officer Candidate School in Quantico. Joe went to OCS, The Basic School, and then Viet Nam. He was a rifle platoon leader and weapons platoon leader in Viet Nam. Upon return to the U.S., Joe became a Shore Party officer at Camp Lejeune, NC. He became a company commander just prior to his leaving active duty. Joe left active duty in 1971, and immediately joined the USMC Reserves. During the same period, he was accepted to Stanford University, eventually earning a Master’s Degree. As a reservist, Joe became a battery and company commander in the only reserve USMC HAWK missile unit. During his final three years in the reserves, he was a special projects officer at Camp Lejeune, NC. He retired from the United States Marine Corps Reserve with the rank of lieutenant colonel after a career that spanned 23 years.

Career: After a successful coaching career at Lodi High School and then Boise State University, at which his cross country team qualified for the national cross country championships, in 1980, Joe was selected as the men’s cross country and track coach at Sacramento State University. In addition to winning conference championships and being named being “Coach of the Year” several times, Joe was the head track coach at Sacramento State for the 2000 Olympic Trials, and several NCCA Championships.

The MCVA is proud of our many successful programs of assistance to Marines and other veterans.

• MCVA issued a $10,000 Sponsor donation to the WWII Foundation in honor of the
2018 Normandie-WWII   International Film Festival & Band of Brothers Actors Reunion. www.wwiifoundation.org/contributors/

• Our Veterans Funeral Honors Assistance Program endeavors to assist chartered veterans organizations throughout the country by funding their efforts to provide dignified funeral services for fallen veterans. We have able to issue grants totaling $77,000 to numerous VFW and American

Legion Posts to help them provide dignified funeral services, especially for our Greatest Generation from WWII.

• The Injured Marine Semper Fi Fund,
located at the Marine base at Camp Pendleton,
California.  Each year the MCVA makes

donations to this cause. 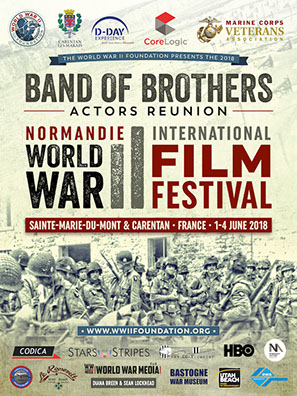 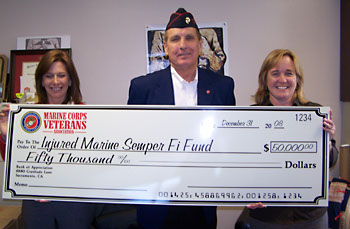 If you or a group of veterans have an interest in forming a new platoon of the Marine Corps Veterans Association, we would like to hear from you.

Please inquire by sending a brief note of purpose in your message and we will contact you with more details regarding the formation process.

If you have any questions on the Marine Corps Veterans Association, please use the form below.

CWO4 Hershel “Woody” Williams, the last living Medal of Honor recipient from World War II, was honored at Memorial services in Charleston, W. Va. Family, friends, fellow Marines, and people from all over the country came to pay respects to Woody while he lay in state at the State Capitol Rotunda, July 2 and 3. A State Memorial Service in Woody’s honor was held at the State Culture Center Theater on the afternoon of July 3. The service included several tributes, including special remarks by the Commandant of the Marine Corps, General David. H. Berger, and the Sergeant Major of the Marine Corps, Sgt. Maj. Troy E. Black.

“A lot of people are going to mourn his passing. And we know his legacy, as Marines, as Woody, that’s going to continue. His bravery, his selflessness, his humility, all of that exemplified the best virtues of this nation. His enduring contributions, enduring to our heritage, I think they have left an indelible mark on the legacy of our Marine Corps. His legacy is yours and mine.” - Gen. David H. Berger, Commandant of the Marine Corps.

Woody passed away on June 28 at 98 years old. He was surrounded by his family at the Veteran Affairs Medical Center which bears his name in Charleston, W. Va. Woody served in the Battle of Iwo Jima with the 21st Marines, 3rd Marine Division, where his actions of commitment to his fellow Marines and heroism earned him the Congressional Medal of Honor. President Truman personally recognized Woody on October 5, 1945, at the White House. 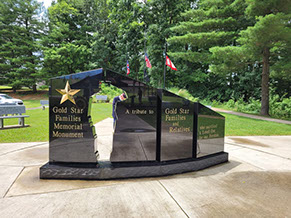 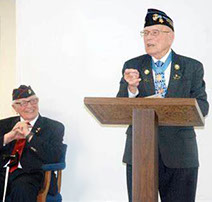 A huge thank you to our own Bernard Lyons, his team of volunteers and platoon who helped with the Gold Star Memorial and memorial event for Woody Williams his dear friend.

© 2022 by the Marine Corps Veterans Association • Photos courtesy of USMC